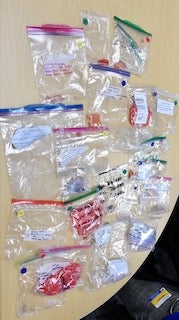 Fish are highly diverse vertebrates widely distributed in many habitats.   Many of these species are readily available for human consumption.  But are you really getting what the label says you are getting? The gene for the mitochondrial 16S ribosomal subunit will be used to help identify various fish species by a method called barcoding.

DNA Barcodes are used to identify and classify living things, and allow non-experts to objectively identify species – even from small, damaged, or industrially processed material. Just as the unique pattern of bars in a universal product code (UPC) identifies each consumer product, a “DNA barcode” is a unique pattern of DNA sequence that identifies each living thing. Students will learn and utilize various molecular biology techniques, including DNA extraction, polymerase chain reaction (PCR), and gel electrophoresis before performing a phylogenetic analysis of their DNA sequence data on the DNA Subway “Blue Line”.

The question addressed by S2S is whether fish species sold at the grocery store are correctly labeled. Students selected for the workshop obtain their own fish sample at a local store. The program kicks-off on a Saturday with CC participants working in the Neil A. Campbell Science Learning Lab, located on the UC Riverside campus, where they learn basic molecular biology techniques and complete the wet lab work required for DNA Barcoding. By days’ end students have isolated DNA, set-up PCR with barcoding primers and run agarose gels so that they know if their sample was amplified. Successful amplicons (usually >80%) are processed by the Dynamic Genome (DG) staff and subsequently sequenced at the UCR Genomics Core Facility.

In subsequent weeks, UCR instructors meet with students on their respective campuses to analyze their sequences and demonstrate the Blue Line of the DNA Subway (http://dnasubway.iplantcollaborative.org), which is used to determine sample identity. Instructors offer continued guidance in person at CC campuses and nearby coffee shops, or virtually through Google-Hangouts. S2S participants are also encouraged to visit the Campbell Laboratory for assistance with data analysis and poster preparation. After dissemination of DNA sequences, teams of students produce an abstract that is reviewed and edited by the instructors. Finally, students work in teams to create a poster describing the questions addressed and their conclusions. Projects culminate in poster presentations at a symposium on the UCR campus attended by faculty and staff of the participating CCs, the participants’ family members, and members of the UCR community.

Dr. Jim Burnette, Dr. Katie Burnette, and Mr. Alex Cortez, both instructors in the DG course, run the one-day workshop and are assisted by upperclassmen that completed the DG course and have also served as undergraduate laboratory assistants (ULAs) in the course. DG was initially developed as part of Wessler’s HHMI Professor grant and is now partially funded by an HHMI Research University Grant. Inclusion of the ULAs in the S2S workshop provides CC participants with near peer mentors who are a valuable source of information about university life including reasons to choose UCR and career opportunities in the life sciences. ULAs and UCR transfer students participate in a panel discussion during lunch with topics on the transfer experience, undergraduate research, and life at UCR.

Over the four years of this initiative, a diverse pool has participated including 144 CC students representing seven Inland Empire colleges (Chaffey College, Crafton Hills College, Mount San Jacinto College, Riverside City College, RCC-Moreno Valley, RCC-Norco, San Bernardino Valley College). Students accepted into the workshop are underrepresented minorities, first generation to college and/or low income. They are required to have a GPA of 3.0 or better, have completed at least one life science course, and expressed an interest in pursuing a bachelor’s degree in a STEM discipline. As of 2015, twelve former participants had transferred to UCR.

Let us help you with your search